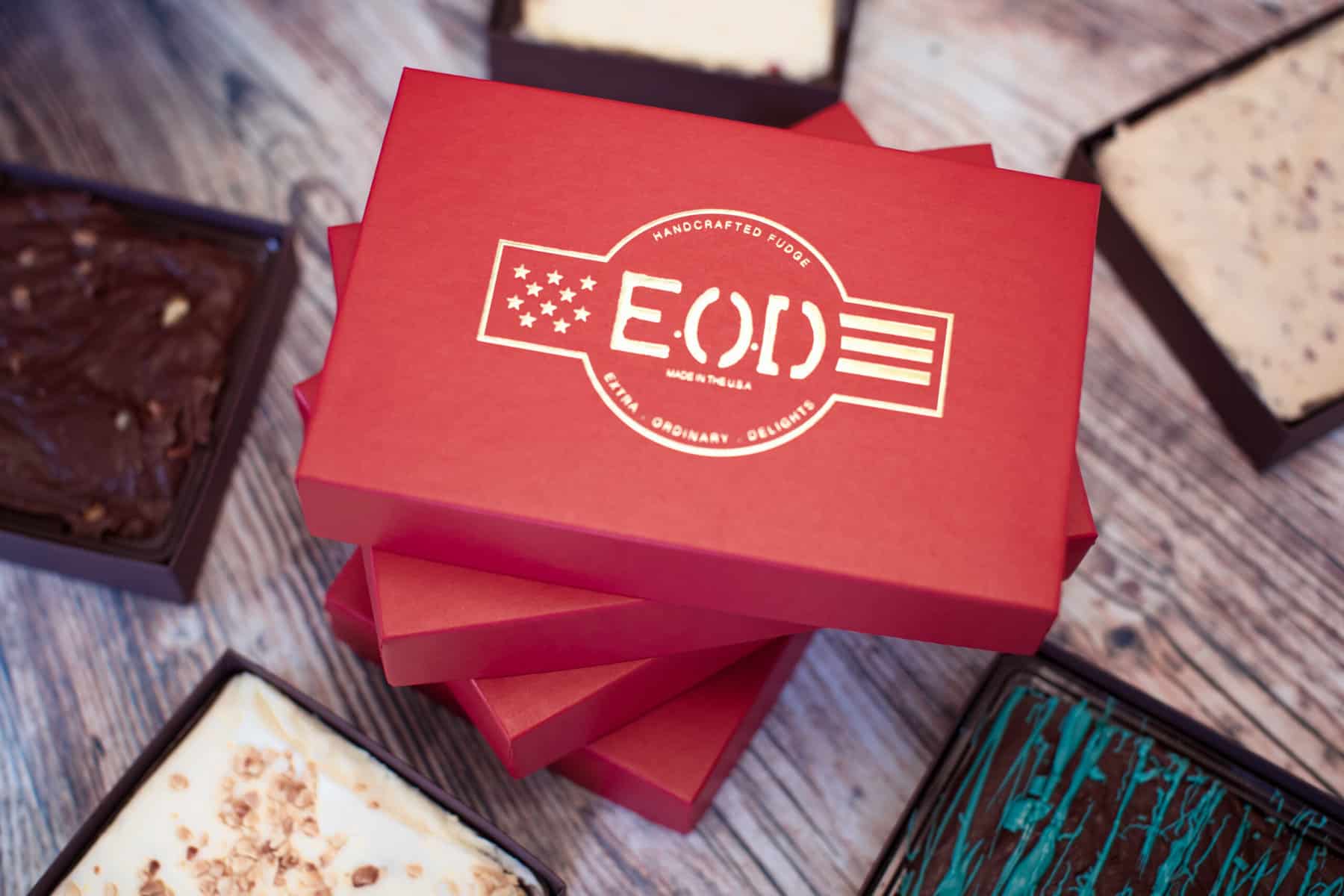 E.O.D Extra Ordinary Delights makes the fudging best confections!  Not only do I whip up delicious and luxurious treats for you, but I like to connect on a regular basis to let you know I sincerely appreciate your interest and business.  Keep reading and get the coupon code for 10% off a fudge order of $50.00 or more, plus an interesting recipe and a little fudging history too…

Fudge-making evolved with a variety of different flavors. The flavors vary by place.  In the US, chocolate is a default, with peanut butter and other popular alternatives to it (especially from eodfudge.com); in the UK, rum and raisin, as well as clotted cream are popular…eww, not sure about either of those flavors!!

Fudge, as it exists today was invented in AMERICA!   Food Historians say It originated in the US during the late 19th century.  Recipes were printed in many periodicals and advertisements during the 1880s.

Fudge-making was popular at women’s colleges.  A student at Vassar College in Poughkeepsie, New York, claimed to have introduced it there in 1888 by selling her own 30 lb (14 kg) batch.  Wow, now that’s a lot of fudge for back in the day!   A diary of another student mentions making “fudges” in 1892.  Wellesley College and Smith College have their own versions of a fudge recipe dating from the late 19th or early 20th century!

Fun fudging fact:  A company in Levack, Ontario, Canada made the largest slab of fudge on October 23th, 2010 with a weight of 5,760 lb!  Now that’s what I call a fun block party!

One of the most important attributes of fudge is its texture. The end-point temperature separates hard caramel from fudge. The higher the peak temperature, the more sugar is dissolved and the more water is evaporated, resulting in a higher sugar-to-water ratio.

Here’s a fun recipe you can try at home…this recipe mixes the decadence of chocolate covered cherries with the comforting simplicity of fudge.  For those strong willed enough to savor each bite, there’s the added pleasure of enjoying the gooey cherry-chocolatey pockets that form around each cherry as the fudge cools in the fridge!

•  3 cups Semi-sweet or dark chocolate – depending on preference

1).  Drain and pat as dry as possible the cherries. Set aside.

3).  In a saucepan on medium heat, melt chocolate then stir in the condensed milk.

4).  Remove from heat and stir in cherries and nuts.

5).  Pour hot fudge into lined pan and slow to cool uncovered in fridge for 3 hours or more until set. Cut into 2” squares to serve.